The Monumenta Bellarmini is proposed as a space to bring together the selection of the unpublished works by Robert Bellarmine inside the APUG, as well as his letters and instructions dating back to his cardinalate.


The collection Epistolae Bellarmini Cardinalis is a collection of letters written by Cardinal Robert Bellarmine, or addressed to him, between 1599 (beginning of his cardinalate) and 1621, the year of his death. The collection was started by Xavier-Marie Le Bachelet SJ (1855-1925), then increased by Sebastiaan Peter Cornelis Tromp SJ (1889-1975) and, in the final phase, integrated by other Jesuits, including Gustavo Galeota SJ.

The first objective of Monumenta Bellarmini is to make available this huge collection so far consulted only on an ad hoc and limited basis.

Monumenta Bellarmini: the (invisible) unity of the difference

In other words, "the Christian heresy" is a special subject of the very first importance to the comprehension of European history, because, in company with Christian orthodoxy, it is the constant accompaniment and agent of European life. Heresy is the dislocation of some complete and self-supporting scheme by the introduction of a novel denial of some essential part therein. We mean by "a complete and self-supporting scheme" any system of affirmation in physics or mathematics or philosophy or what-not, the various parts of which are coherent and sustain each other.

The 17th century presents significant rises of complexity, which have been preparing the future socio-cultural developments of the society. Here complexity refers to the increasing difficulty to report items within a system. This increase in complexity, through enhancing the possibilities that may be implemented, will force selection and choice, which involve trying to contain or reduce the contingency, but, at the same time, helping to create it. The complexity is not in things, but in the form of observation. 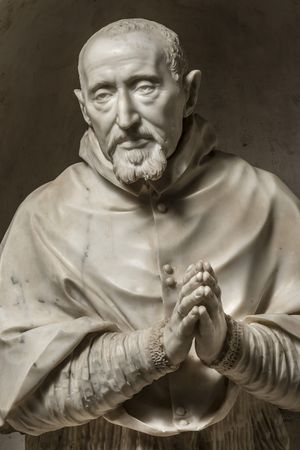 One goal of this project is discovering the latency of Monumenta Bellarmini, conceived as a documentary observation of the society from which it was produced. The identification of these historical a priori might help to achieve the description of changes of what Michel Foucault used to call General grammar. Bellarmine's production would help to identify the distinctions which were operated with the aim to establish the episteme of early modernity, understood as a set of discourses, institutions, laws, rules, philosophical and scientific statements. Ultimately, a network of provisions or conditions of possibilities that generated new discursive and taxonomic practices.


The Catholic and Protestant historiographies, in turn, actively participating in these "wars of truth"[1], have been producing an auto-generated complexity from the discipline itself, thus establishing an exponential increase of controversiality gradients. This complexity becomes elusive for conscience and historical analysis is likely to get lost in the details. Besides this documentary monumentality, there is also the Robert Bellarmine's biographical reconstruction (XVII-XX), which has often been conceived in controversy.


Faced with such a stratification, anyone wishing to build knowledge starting from a causal network of events to be included in a coherent and plausible narration, would probably start a one-way trip.


Our research proposal does not intend to wonder what truth (dogma) or error (heresy) are, but which differentiations made it possible attributing a value of error or truth to certain assertions. How did this difference arise and how did it move through time? How come some historiographical systems have been observing Robert Bellarmine in a certain way while others did it in a different way?


Some documents of the Monumenta Bellarmini may be an opportunity to describe the evolution of religious (Christian) communication in early modernity. What is called heresy is a variation that allows to recognize a particular communicative selection that is designated as “ecclesiastical orthodoxy”. To that effect, the heretical against-communications led to new selections and then to further stabilization, invigorating the identity construction. This process resulted in an increasing hierarchisation of the Church, as well as an increase of sacramentalization and dogmatization.


Some envisaged research lines to study the Monumenta Bellarmini are as follows:

These lines of research will be implemented by working on the platform Gregorian Archives Texts Editing (GATE), a work and study collaborative place where all interested researchers can contribute by participating in the transcription and annotation of documents or commenting and discussing individual aspects of the project. To request an account and start the collaboration, please visit this link.

We would like to thank Daniel Benvenuti for his help in digitizing the Epistolae Bellarmini Cardinalis collection and Jan Machielsen, who provided many EBC letters with metadata and remarks about sources and authors (look also here for a news about his valuable contribution).