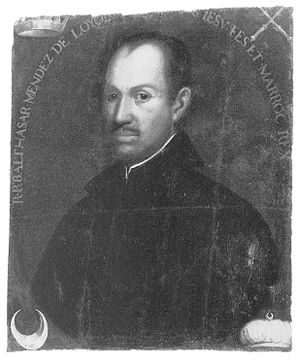 The Gregorian Centre for Interreligious Studies in cooperation with the Historical Archives of the Pontifical Gregorian University (APUG)started a project to enhance the unpublished writings of Baldassarre Loyola Mandes S.J. (1631-1667).[1] Son of the king of Fez (Marocco), Muley Mohammed el-Attaz a Muslim prince converted to Christianity, after he was capture by the Knights of Malta, while he was travelling to Mecca for pilgrimage. He took the name of Baldassarre Loyola Mandes to honor both the day of his baptism (July 31, 1656, feast of Saint Ignatius of Loyola) and the knight who made him prisoner and who was his godfather (Balthasar Mandols). A few years later, the 11th General Congregation of the Society of Jesus, gathered in Rome, authorized his admission to the novitiate at Saint Andrew at the Quirinal (1661). Desiring to leave on a mission to the empire of the Great Moghul, he died in Madrid at the beginning of his journey. His life, well known in the first Society, was staged by Pedro Calderón de la Barca and it was played in all the Jesuit colleges. Baldassarre was the only former Muslim admitted to the Society of Jesus until the abolition in 1946 of the decree of the 5th General Congregation (1594), which forbade the admission of net-converts.

Today APUG holds most of the Loyola Mandes's survived manuscripts, containing letters and devotional works. This collection will be digitalised, transcribed, annotated and made available to researchers through GATE. This work started in 2017 thanks to the collaboration of dr. Federico Stella during a traineeship within the Torno subito program, funded by the Regione Lazio.

The collection consists in a group of miscellaneous manuscripts signed with the call number APUG, Ms. 1060 I-IV.[2] This corpus contains about 300 letters and several other documents: among them there is also a Loyola Mandes's autobiography. The documentation is mostly in Italian, but there are some Latin and Arabic texts too.


To search within the whole content of the Balthasar Loyola Mandes Collection, use the following search module.

Among the Loyola Mandes's manuscripts there is a codex of 50 sheets, probably written by himself, containing the following texts:

These documents has been transcribed according to the rules adopted in GATE, which include the mark-up of the text using several TEI tags to highlight textual phenomena such as abbreviations, deletions, gaps etc.; then the text has also been annotated with critical and semantic annotations. With the latter operation, it is possible to identify portions of the text such as names, works and concepts and to link them to specific pages.


To access to the annotated transcriptions click on the title of the texts listed above; at the following link it is also available a diplomatic transcription of all the texts mentioned above: APUG, Ms. 1060-04.


It is also possible to make a full-text search of the manuscript, using the following search form.

Thanks to the collaboration of GATE users, the transcription of two other manuscripts is under development:

As mentioned above, the Loyola Mandes's correspondence contains about 300 letters, mostly received by him during his life as a convert. A digitalisation of the letters is under development, anyway some of them are already available.


It's possible to search the metadata of letters (Sender, Recipient, Date, Language) using the following data-table:

The available letters have also been transcribed and their text can be searched using the following search form.

This project wouldn't be started without the collaboration of father Laurent Basanese S.J., director of the Gregorian Centre for Interreligious Studies; prof. Emanuele Colombo (DePaul University) and Federico Stella (Gregorian University - University of Naples "L'Orientale") provided most of the transcriptions: to them goes our sincere gratitude. Prof. Nabil Matar (University of Minnesota) provided transcriptions and translations of some Arabic documents.