THE JESUIT COLLECTION AT COLLEGIUM ROMANUM:

The research activities carried out at the Historical Archives of the Pontifical Gregorian University (APUG) integrate the ongoing PhD project «The Jesuit Collection at Collegium Romanum: Circulation of objects between missionary activities and collecting practices in the Early Modern Age»[1], which studies the musaeum at the Jesuit Roman College under the care of the Jesuit Father Athanasius Kircher, in the period from 1651 to 1680.[2] From the framework of Material Culture Studies in dialogue with the discussions on the History of Collections, the projects aims to follow objects as they moved into and from the Roman College Museum's collection, thus approaching the global circulation of elements of material culture which participated in both European early modern collecting endeavors and the missionary enterprises of the Society of Jesus.

The goal is to trace the networks of social relations and meanings that involved those objects deemed worthy of collecting, contributing to a better understanding of both early modern collecting practices and the specific participation of the Jesuits in these activities, as well as accounting for transformations in the material aspects, uses and meanings of the objects in transit. The activities at APUG, in close collaboration with GATE, involved the study and transcription of a selection of letters received and sent by Athanasius Kircher, which will support our attempt to identify particular objects and map their movements in entering and leaving the collection, complementing the information found in the two earliest catalogues of the museum[3] and other primary sources.

It is a somewhat common claim, in the literature on Early Modern collecting practices, that networks formed by missionaries in the many parts of the world, particularly Jesuit missionaries, played an important role in the global circulation of information and objects in general and, more specifically, of collection-worthy objects. Less common in this field of investigation are studies that support that claim by discussing precisely which objects or kinds of objects traveled through these networks, what collections and collectors these objects reached, and what their destinies were since their first incorporation into collecting settings. Beginning at the so-called musaeum of the Jesuit Roman College and its first guardian, Athanasius Kircher, as the central nodes of a network we attempt to retrace, our goal is to identify and follow the displacements of particular objects as they moved into and out of this collection, as a way to comprehend the mesh of social relations and meanings that entangled things, people, institutions, places, and practices at the confluence of Early Modern collecting and Jesuit missionary activities. We, thus, hope to collaborate to a refined comprehension of the concrete participation of the Society of Jesus in the collecting practices of the Early Modern Age.

Initially established in 1651, on the occasion of the donation to the Society of Jesus of the Roman patrician Alfonso Donnino’s private galleria after his death, and incorporating other groups of objects already amassed in the college,[4] the Roman College Museum would have articulated the three main concerns of the Jesuit order – education, court society, and missions.[5] The museum is said to have been employed as a pedagogic tool in the training of novice Jesuits, especially those bound for missionary activities abroad; as an expedient to entertain and attract the patronage and alliance of members of noble families and elites; and as a locus for the production of knowledge through investigation, experimentation, and discussion based on the objects there assembled. 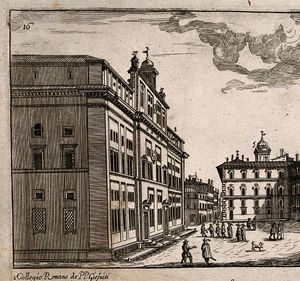 It is hard to estimate the precise measure to which the museum’s fame was attached to the prominence of Kircher himself, but it is suggestive that it was frequently referred to as musaeum Kircherianum in different contemporary and later documents. Likewise, the privileged position Kircher seems to assume as sender, receiver, and distributor in the network we attempt to retrace ensues from his many roles and activities which rendered him notorious. He held a place of considerable prestige in the Society’s hierarchy and, as an appointed professor at a model pedagogic institution that provided from basic education to higher-level instruction in Philosophy and Theology, participated in the teaching of both the Roman elite and of members of the Society of Jesus and other religious orders. In the Roman College, Kircher lectured Mathematics, Geometry, Astronomy, and Controversies from 1634 until around 1645, when he was dismissed from his teaching duties to dedicate himself to researching and writing. He applied himself to a variety of subjects, such as Egyptology, Cryptography, Magnetism, Theology, Optics, Acoustics, Music, Geology, and Astronomy, publishing over 40 works widely read across Europe and other continents. Kircher also stood out as an inventor of machines and devices contrived both to marvel and to prove philosophical principles. Along with these activities, Kircher corresponded with nobles, princes and popes, with Catholic and non-Catholic scholars, with the curious and the readers of his publications, as well as with missionaries, especially Jesuit missionaries, in the many parts of the world. 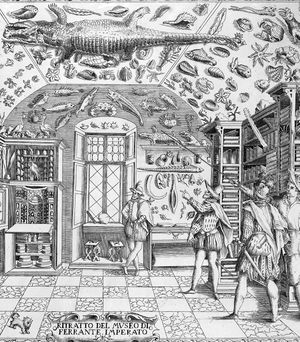 As Paula Findlen observes, “Kircher’s museum was noteworthy but by no means unique”.[6] Animal, vegetal, and mineral specimens, objects and ornaments from other peoples, monuments from antiquity or from foreign nations, examples of the finest arts and crafts, scientific instruments, machines, and automats were widely considered items worthy of collecting. Collections, in all their variety, fulfilled a myriad of intentions, assuming perchance political, economic, scientific, medical, esoteric, and philosophical functions. Beyond ‘treasure houses’ or ‘laboratories’, as they are frequently defined in the literature, early-modern collections were places of sociability: to poses a collection meant, automatically, to strengthen relationships, to enlarge knowledge, to have continuous contact with illustrious visitors, other collectors, merchants and intermediaries.[7] The exchange of letters to discuss collecting practices and to trade objects was particularly common among scholarly collectors, and gifting and receiving ‘curious objects’ was a way to reinforce worthiness and the identification of collectors as a social group. To some extent, the broadness of a collection could attest to the collector’s esteem among his peers, as the access to rarer objects would depend on social relations with fellow collectors, with distinguished visitors, and with merchants, sailors, missionaries, and other mediators, in a network that connected those involved directly or indirectly with practices of collecting in a global scale.

By focusing on a part of the material culture repertoire in circulation across many parts of the world, this research can contribute to a better understanding of collecting in the Early Modern Age, as well as of the connections between collecting practices, missionary activities, and other lay and religious activities, and of the relations established between those involved with collecting practices to different degrees. The privileged position of the Roman College Museum in the Jesuit Society’s structure makes this a favorable subject for such investigation.

Project activities in collaboration with GATE-APUG