Athanasius Kircher’s Organum mathematicum. On the Evolutionary Improbability of an Information Processing Innovation 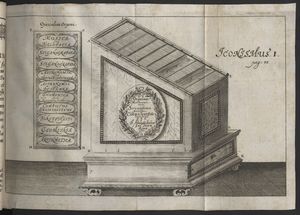 The research project is aimed at the publication of a collection of contributions in English specifically devoted to the Organum mathematicum. The book will be edited by a committee chaired by Prof. Martín Morales and composed by Dr. Irene Pedretti, Dr. Lorenzo Mancini and Prof. Alberto Cevolini. The book will contain about 15 scientific articles. The publication may include an iconographic section aimed at showing the external form, the internal structure and the functioning of the Organum mathematicum.


This publication, which is the first at international level specifically devoted to the Organum, shall include the contributions of scholars coming from various disciplines (historians of science, historians of mathematics, archivists, sociologists of science), whose purpose is illustrating not only the functioning of the individual parts of which Kircher’s machine is composed, but also the historical, social and cultural background surrounding his invention. Researchers involved in this project will be selected by invitation or through a call-for-papers.